Special Offer: up to 30% OFF Vyasa Draupadi Fire Lab During Aadi Month Packages

“The impact of the coronavirus is not only on the health issue and death…but, destroying the economy. Anyway, god can intervene and set things rights.

I am bringing into this earth plane an ancient forgotten Goddess called Draupadi.

Draupadi is a character in the Mahabharata, and she was a queen. Draupadi, what she wanted? Draupadi wanted incredible power…she meditated on that, and then she ended up marrying five brothers. The reason she married these men was that she knew these were five different Gods, and then by marrying them, she became the Goddess of infinite power…she is the sum totality of the power of these five Gods. She was extremely beautiful, and she is the Goddess of wisdom. She is the Goddess of power, and everything was with her because she herself was born out of the fire, not through human birth.

I have been commissioned by the Gods and Goddesses to bring her back. She can bring dramatic results to end suffering- both health-wise and economic suffering as well. So, that is what we are going to do- inviting her to the earth plane.

She is the one who is going to bring wealth, status for women. She is also the Goddess who is in-charge of bringing beauty to everyone, men and women, primarily women. And also self-esteem….wealth, and prosperity for everyone. Her role is to bring you wealth, happiness, fun, lots of material blessings that pertain to this world. Her name is Vyasa Draupadi. Make a prayer to Vyasa Draupadi. She will give you every material blessing you ask her. God Bless!”
~ Dr. Pillai

Dr. Pillai has specially commissioned a daily Vyasa Draupadi Fire Lab to start July 21st and continue throughout powerful Aadi Goddess Month. You can participate in the group Fire Lab or sponsor a Fire Lab performed individually for you and invoke the blessings of Goddess Vyasa Draupadi for wealth, status, self-esteem, happiness, and prosperity.  Participation is available on a one-time basis, every Tuesday or daily during Aadi Goddess Month. 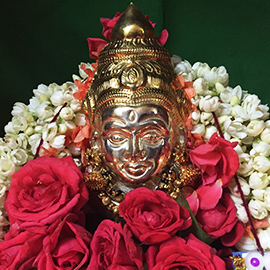 The important thing about this particular ritual or the Homa/Fire ritual is that I am bringing today into this earth plane an ancient forgotten Goddess called Draupadi. Draupadi has been misunderstood as a form of Kali; a woman went through a lot of suffering in the epic. She was extremely beautiful, and she is the Goddess of wisdom. She is the Goddess of power. Her role is to bring you wealth, happiness, fun, lots of material blessings that pertain to this world. Make a prayer to Vyasa Draupadi and she will give you every material blessings you ask her.

What Will I Receive?

You will receive the sacred grey ash powder from the homa and kum-kum (Red Vermillion Powder), which will be blessed in the rituals. Keep this on your meditation altar and wear it on your forehead during meditation or at other times to expand the Divine blessings into your life.

The ritual is the carbonization of thoughts. Carbon is our information bearing atoms. The carbon residue (ash) given out as Prasad is to be placed on the third eye area of the participants and carries the blessings of the archetypes invoked.

Please Note: Your energized thread and Prasad will be shipped from Chennai, Tamil Nadu, after the entire set of rituals are performed. For international shipping, please allow 2 – 4 weeks for delivery.