Most Compassionate Deed Confers Wealth, Well-Being and Prosperity Upon You & Your Successors

“Donation of cows is superior to all others. Cows are supreme and sacred.”

Although there are several forms of donation, donating a cow is considered the most supreme and sacred of all donations one can do in a lifetime. According to ancient texts, donating a cow can liberate you and your ancestors from sins committed knowingly or unknowingly during one’s lifetime.

As per sacred text Bhavishya Purana, ‘Gho Dhaana’ or cow donation is considered a pious act that can bestow all the benefits for a blessed life and also reserve a place for the giver in heaven after death.

As per the sacred text Garuda Purana, a cow can carry a soul beyond three kinds of hells and absolve all kinds of sins committed in the present and previous births. This sacred text also mentions that the departed soul has to cross a treacherous river called ‘Vaitharini,’ which stinks intolerably. The donation of a cow can help your ancestral souls cross the river easily by holding onto the tail of the holy cow, which houses all divine beings.

Blessings of Donating a Cow

A cow is regarded as the most sacred animal in the Hindu tradition and is believed to be an embodiment of all the Gods and Goddesses, and other divine beings. It is not only important to donate a cow but also its calf and provide financial support to maintain the cow and calf through their lifetime.

According to sacred texts, the donation of a cow confers immense blessings of wealth, well-being, and prosperity upon you and your successors.

On Aadi Amavasya, one of the three powerful New Moon days in a year to clear ancestral debts and help liberate them, AstroVed is giving you a Divine opportunity to donate a cow and liberate you and your ancestors from sins committed knowingly or unknowingly during one’s lifetime. You will individually be sponsoring cow donation in your name which can help obtain relief from afflictions in your life due to unhappy ancestors. 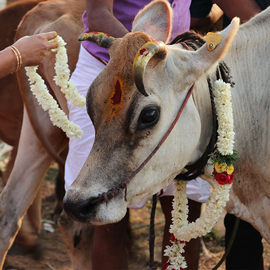 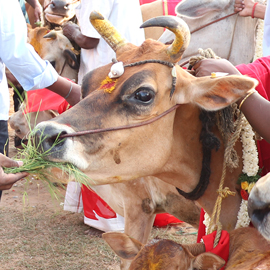 Join Pillai Center’s initiative to daily provide nutritional support to a cow to invoke divine blessings for you and your family. Begin your first feeding on the upcoming Mahalaya paksha, one of the powerful New Moon days to satiate the restless souls of your ancestors and seek relief from ancestral afflictions. Select one of our 3-month, 6-month or 12-month package options. Participate in the holy act of daily feeding a cow to invoke blessings for prosperity and happiness.